I can still clearly remember the first time I listened to the Pearl Jam “Ten” album – it was sitting in the stands at a Freshman basketball game, waiting to play the Junior Varsity game afterward (in my high school Freshman and JV teams played on the same nights, one right after the other). It was my friend Greg’s cassette tape, but he let me borrow it. So, I slapped it into my Walkman cranked the volume up a bit and pushed play.

That was my introduction to “grunge” or “90s alternative” and I was immediately smitten. I listened to the album front to back and back to front that night – in fact, I don’t think Greg got his cassette back for another couple of days as I devoured the unique vocals of Eddie Vedder mixed with the fuzzy guitar riffs, the dark lyrics sad, angry and full of mistrust – perfect for a teenage boy clumsily finding his way. It was unlike anything I had really ever heard before. I couldn’t get enough.

Pearl Jam was my gateway to Smashing Pumpkins, Soundgarden, Alice in Chains, Nirvana, Stone Temple Pilots and to many more obscure bands like 7 Mary 3 or Dinosaur Jr. or The Crash Test Dummies (I still love Afternoons and Coffeespoons). I owe Eddie, Stone, Jeff and Dave an immense debt for that.

So, then, “Ten” will always hold a special place in my heart. Like a first love, you can never forget it and it forever changes you on a personal level.

Since Pearl Jam, and the grunge scene in general, is associated the most strongly with Seattle – I figured a coffee themed cocktail was appropriate. I just happened to have a recipe for one – The Revolver – the recipe is below. I hope you enjoy it and that it inspires you to give your favorite 90s alternative album a spin while you sip. 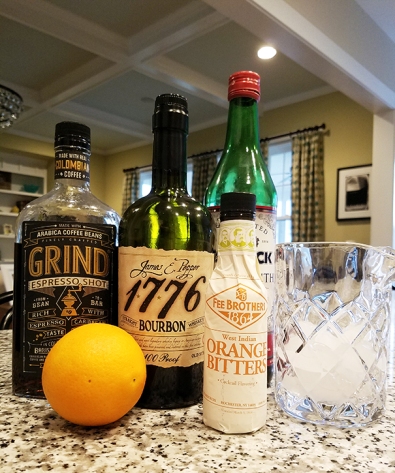 Here’s mud in your eye!