It’s been a couple of weeks since our last post as our world has been incredibly busy, but we finally had some quiet time together last night – and I must say, that it was a perfect Saturday night. With our San Francisco & wine country trip coming up in two weeks to celebrate our 10-year wedding anniversary, I was inclined to take advantage of this beautiful night and enjoy a recent addition to my vinyl life list: Jack Johnson’s In Between Dreams. 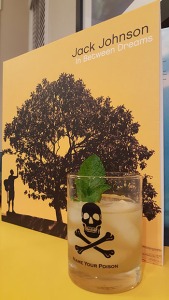 Released in March 2005, just a few short months before Trent and I met, I was playing this album like mad when we started dating that summer. It’s good thing for me that he liked it, too, otherwise I might not even be writing this post. I’ve heard some music enthusiasts (I’m trying to refrain from using the term “music snobs” here) scoff at artists like Jack Johnson and this album in particular. Maybe it isn’t indie or complex enough for them, but for me, I love the simplicity of the singer-songwriter beachy vibe that Jack Johnson delivers, and you’ll eventually see that I feel that way about a number of other artists, too.

This album in particular holds so many memories for me, for the time that I met and fell in love  with the man of my dreams, and the years that we’ve spent together. Every time Banana Pancakes comes on I just have to stop and smile – and the best part is that he does it too. Although, I did have to give him a hard time about serving up our cocktails in glasses with a skull and crossbones on them last night – perhaps his take on the upcoming anniversary is a tad different than mine…

Well, as she said, she picked this album because of our impending anniversary. I love this record and will gladly listen to every track on it just about any day of the week. It’s definitely not something I need to be “in the mood for” like some music. A large portion of the reason for that is the emotional connection I have between this record and meeting the love of my life.

What to drink with it, though? Obviously something beachy or something suited for warm weather, at the very least. We didn’t have everything in the house for a Singapore Sling (plus we still haven’t bought proper tiki mugs), so we decided on a cocktail called the Shipwreck.

I hope you give this drink a try and find it enjoyable. We were well pleased as we sipped these on the back porch last night, listening to Jack Johnson float from the speakers, mixed with the sound of the frogs and the warm early-spring breeze.

Add all ingredients to a cocktail shaker with ice, shake well and double strain into a rocks glass with fresh ice. Garnish with more mint.

With most of these cocktails that call for citrus, I find the juice to be slightly over the top, so for round 2 we used less lime juice.

This drink also reminded me that we don’t have a fine strainer in the house, either – another thing to add to the list…. It seems to be never-ending.