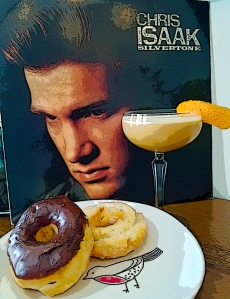 To say it has been some time since we’ve posted would be a drastic understatement. We’ve both had every intention of being better at keeping up here, but obviously we haven’t been terribly successful. Well, that is all about to change. For real this time!

To kick things back off, while enjoying a lazy Sunday morning spinning vinyl, Trent had the idea to whip up a brunch related cocktail that he’s been wanting to try. I’ll let him fill you in on those details, but trust me – it is delicious. In fact, I wouldn’t mind just staying home the rest of the day sipping on these, but I’m afraid we wouldn’t get much else done. Also, I should mention, while donuts are not typical brunch fare, our local donut shop is too good to pass up sometimes. Today was one of those times.

The album choice for the morning is one that really surprised both of us when we stumbled upon it last year – Chris Isaak’s Silvertone. We have Noble Records to thank for this recommendation (and sale), because as much of a fan of Chris Isaak as we both claim to be, I’m sad to admit that neither of us even realized that this album existed. Or at the very least, we never gave it any attention. This is Chris Isaak’s debut album from 1985. That’s right – we were both only 11 when this album came out so many years ago. It’s incredibly timeless and holds true to Chris Isaak’s style even all of these years later. San Francisco Days has always been a favorite of mine, but this one may have taken it’s place. If you haven’t given it a listen by now, I couldn’t recommend it more.

This is a great breakfast/brunch cocktail. I adapted this from a recipe I found in Garden and Gun from Tristan Ferchl at the Catahoula Hotel in New Orleans. This is definitely a keeper if you like coffee, as it is very brew forward. It will be a staple for weekend morning cocktails around our house, for certain! The recipe:

Combine all ingredients in a shaker filled with ice and shake until well chilled, about 20 seconds. Double-strain into the glassware of your choice.